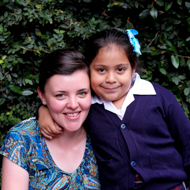 As part of the student program, I loved being involved in the children’s ministry, sitting on the ground surrounded by crayons, paper hearts, and kids. However, God also taught me a significant lesson this summer through the ministry of my Guatemalan host family.

My host parents, Marco and Clara, moved to the village of El Tizate fifteen years ago – the day that God called them to become missionaries to their own people. Most mornings, Marco leaves the village early. He doesn’t always know the places he will visit that day, but he relies on God’s direction to take him there. His ministry strategy is very practical – connect people who have needs with the resources to meet them. A conversation with Marco is filled with stories of the sewing machines he has taken into the mountains or the trees he is planting whose leaves can combat malnutrition. Marco had invited me to travel with him many times, but it had never fit with our team’s schedule. When I had an unexpected free afternoon, I decided to take him up on his offer.

The plan was to visit a Christian widow who lived in the mountains. When we arrived, however, her house was empty and a neighbour told us that she had been taken to a hospital the week before. There wasn’t time that afternoon to travel to the hospital, but Marco felt that God was directing us to visit another woman who lived nearby. She was the widow of a pastor and had served alongside her husband in a small church for over fifty years. However, the congregation could not support a pension, and she now lived in a small house near her daughter, making tortillas to pay for groceries.

Her house was also empty when we got there, but Marco soon found her on the other side of the village visiting a sick friend. He had been given money to buy her some supplies, so we drove her to the market. As we turned back onto the highway to return home, the woman began to cry. Marco learned that she had had no food left in her house and had been praying that God would provide her with something to eat that day. Our arrival that afternoon was a direct and timely answer to her prayer.

Later, as we stood and prayed together in her one-room house, I was struck by how blessed I was that God had allowed the course of our lives to intersect. I am young and learning to serve God in Canada; her long life has been spent serving God in Guatemala. Even though I was only along for the ride that afternoon, our encounter made me a witness to God’s provision and challenged me to trust Him in a much more radical way. All I can do is thank God for such a glimpse into the ministry of national missionaries like Marco and Clara and the lives of those they serve.