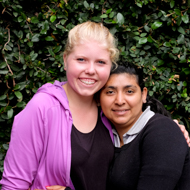 During my time in Guatemala I had the privilege of going into Antigua for two mornings every week to do evangelism. Antigua is a city full of historical culture that attracts many tourists throughout the year and it was ideal that this location was only approximately 30 minutes by bus from the village where my team was staying. Before my time in Guatemala I used to understand evangelism as something those ‘crazy’ Christians did, trying to force their religion on other people. I pictured people roaming the streets, telling people to repent, or else, “Say hello to Satan!” However, God showed me that this perspective was not accurate to His character and instead He wanted me just to love. Today, I would define evangelism as an opportunity to make myself available for God to use to show people His love, whether it be through conversation, prayer, or even a joyful smile.

There was one day in particular where God truly opened my eyes to see what evangelism can really be. I was sitting on a bench in Parque Central (Central Park) in Antigua, praying and asking God to show me who He wanted me to love today. Suddenly, this man came up to me and started a conversation. He said to me that he was a local tour guide in Antigua and he was trying to start his own business in the tourism industry, which is quite difficult due to lots of competition. It would have been so easy for me to just move along and not listen, but I heard God say, “Listen! Hear his passion.” As I gave this man my full attention I was able to hear how passionate he was about Guatemala and that he truly wanted tourists to have a good experience and gain an accurate understanding of the beautiful history and culture. Eventually, I worked up the courage to ask him if I could pray for him and his business. He gladly accepted and I could tell that he was very thankful by my willingness to listen.

After I had prayed for him, he thanked me and left. There was something so beautiful about that conversation and I just felt this peace and knew that I was supposed to stay on that bench a little longer. About 20 minutes later, as I was still sitting on that same bench, the tour guide came running up to me. He said, “I just needed to find you and say thank you and that I believe in your God. I just got my first customers for my business!” He was so excited and his excitement overflowed into me until I was really excited too! I saw first-hand how God answered my prayer, which was so encouraging for me. I watched as God became so alive, so real, in the life of that tour guide. I learned that God loves to answer prayers and bless those who step out in boldness, faith and obedience.

Kaia Nickel was a participant in this year’s Summer Student Program.