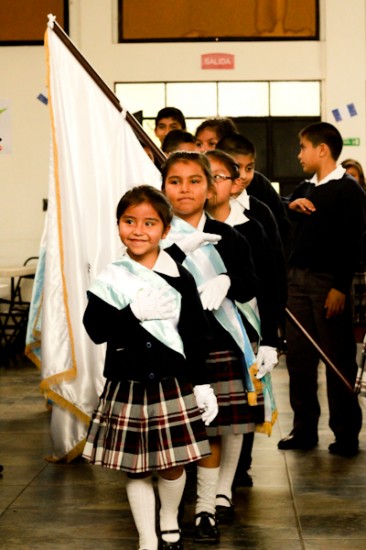 A week ago was “Día de Independencia” (Independence Day) in Guatemala. Though the actual day of Independence falls on September 15th, it truly was a weeklong celebration, putting July 4th and Canada Day to shame.

We kicked things off with a program put together by our oldest grade, 2nd Básicos, rejoicing that we can live in a free nation and praying that God would bless the country. It is a tradition in Guatemala that during this time of the year the students with the top grade in their class, known as “abanderados,” get honoured by wearing special sashes of light blue and white, Guatemala’s national colours. After the program finished, the whole school feasted on typical Guatemalan foods, such as chuchitos, tostadas, and much more. It was a great start to a great week.

Our students participated in two local parades, one for the younger grades on Friday and one for the older ones. The theme this year for the younger grades was “recycled materials” so our youngest grades all came in outfits and dresses made from recycled chip bags, bottles, caps, egg cartons, newspapers and whatever else they could find. We were blown away by their creativity. One girl even made a dress out of corn husks! Our “abanderados” led the way carrying the Guatemalan flag and the school flag as we snaked through the local towns, while everyone lined the streets to watch. The older grades had their parade the following Monday and the crowds lining the streets continued to grow.

Independence Day is marching band high season and our band has been practicing all year with Profe Danny in anticipation. They played in three different parades, loudly blasting exciting worship music with brass instruments, drums, and xylophones. Not only did they play smoothly, but they also danced in formation while performing. We were all very proud of them and the locals took note as well; Danny was complimented on how well the band had improved since last year. Independence Day was a great day to thank God for this country and to go out into the community and present the school through worship and creativity.