A Car for Jervin & Jasmin

Jervin and Jasmin are two of our longest serving staff members. Jervin is our school pastor and Jasmin is one of our teachers. In recent years the Lord has called them to start a church in the city of Escuintla, about an hour’s drive away. Unlike the relatively temperate highlands surrounding Tizate, Escuintla is hot and muggy, a sweaty and bustling city with a poor reputation in the rest of the country. Unhindered by the fact that they lived an hour away, Jervin, Jazmin and their two kids started reaching out to people in Escuintla, building connections, and starting weekly services. 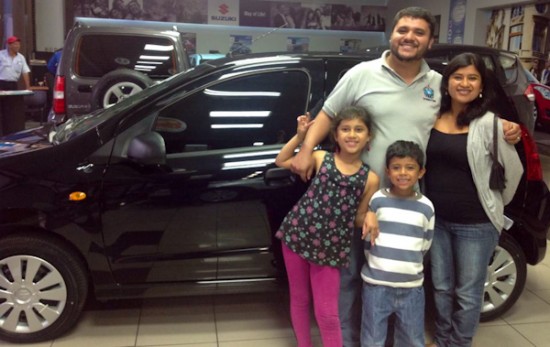 A few months ago Jervin felt God call them to take the next step and move to Escuintla. Still remaining fully involved at the school, however, the family started commuting every day. Without a car their only option was the public transit. The buses from Escuintla to Tizate are old, refurbished school buses, often very crowded and almost always blasting music. Some even had screens that would show inappropriate music videos that Jervin and Jasmin would try and shield their kids from. Between the very early mornings and the long, crowded commute it was a tiring solution to serving in two places at once. So the family and everyone around them started to pray for a car. If God was calling them to serve in two places at once then He would provide a solution.

The answer to all those prayers came this summer when God moved on the hearts of our family trip members. As soon as they got back to Canada they started phoning around. Turns out there were people all across Canada who have been impacted by Jervin and Jazmin’s love and ministry; they were all to happy to give. When Jervin and Jasmin heard that they were getting a new car they were so moved by God’s provision that they instantly broke down in tears. In a matter of weeks there was enough money to buy not just a old, used vehicle that would need costly repairs in a couple of years, but a fantastic car that would be reliable and fuel efficient.