When we started Colegio Cristiano Avivando El Fuego (Fanning the Flame Christian School) we only had a few small classes. Every year we have added another grade and now there are over 200 students from Junior Kindergarten all the way until Grade 9. Our vision in the school is about being committed to raising up disciples of Christ through the means of education and as our first official graduation in October approaches we have been planning and dreaming about the furthering of that vision.

The Guatemalan education system has three different stages: primaria, basicos, and carerra. Primaria goes from Junior Kindergarten to Grade 6. Basicos is divided into first, second, and third basicos (roughly equivalent to Grade 7-9, with some election class options). After basicos students can enrol in carerras, taking classes towards either a specific career or as preparation for a university degree. The graduation this October marks the completion of basicos by our oldest grade and we want to continue with them on their educational journey.

Nationally there is a large drop-off in school enrollment after Grade 6 as parents take their kids out of school to start earning money for the family, so when we expanded into basicos classes we were warned to expect a steep dip in enrollment. We hoped and prayed that parents would see the value of education and God’s work in their childrens’ lives and keep them enrolled and were overjoyed at the continued rates of enrollment. As we make this next transition to carerras we are again entering into a similar process of hoping and praying for God to work against the expectations of cultural norms surrounding us. 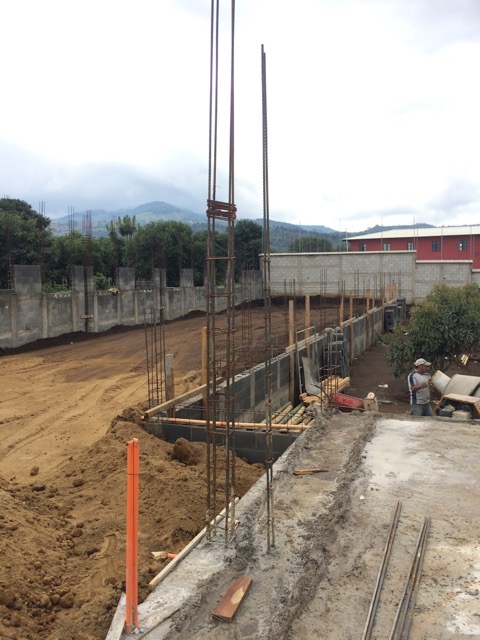 Expanding into carerras also means expanding our facility. Our big raspberry red school building nestled on top of the hill above Tizate is a bustling busy place. By shuffling a few things around we can start the first year of carerras in our existing rooms, but by the 2017 school year we will need more classroom space and room to grow beyond that. We have acquired the farm field directly behind our current property and at the beginning of this year we broke ground on a whole new building!

The new carerras building will be located behind the soccer field of the existing school building. Once it is fully completed it will be an L-shaped 12-classroom facility complete with its own bathrooms, staff room, study hall, and meeting space.

Though we need new classrooms by January of 2017 the construction timeline is quite flexible. The current plan is to take two years to complete the first floor of classrooms (along with a basement meeting room) and take it to completion a year later, though the plans could be sped up if need be or put on pause after we’ve built the initial first floor.

The new carrera school building is not as large-scale a project as our current facility, but it is definitely big enough to feel like a pretty scary step of faith. Costs on a project like this in Guatemala can be hard to project accurately. Everything from fluctuating exchange rates to unforeseen construction complications can change the numbers, but we currently estimate the entire project costing between $250,000-$500,000.

When we were contemplating our last big building project we were intimidated by the sheer size of the need, but as we felt God leading us in that direction how could do we otherwise? As we stepped out in faith we were shocked, amazed, and floored by the Lord’s faithful hand of provision. People with just the right set of technical skills came and volunteered their time. New donors came through with amazingly generous donations. Before we knew it we were standing in a beautiful school that God had built for these students. We keep being reminded of that fact that He is even more invested than we are in these kids’ lives.  So as we step out in faith we are looking forward to seeing Him provide again.