My name is Jen Robinson and I led a team of eight girls from Trinity Western University just now in May. They were very enthusiastic, joy filled, and ready to serve in whatever way possible. We did a lot of laughing and joking, but also got serious and sought the Lord through worship, prayer and reading/learning from the Word.

“For my power is made perfect in weakness. Therefore I will boast all the more gladly in my weaknesses, so that the power of Christ may rest upon me” (2 Cor 12:9).

A few years ago when I lived in Guatemala for six months, I got to know a little girl named Maria. Maria would often show up at my door wanting food, clean clothes, a warm shower, and most importantly, love. This little girl became very important to me, and I felt very burdened for her and her situation.

Her family lives across the dirty river that runs through the village of Tizate. Both of Maria’s parents struggle with alcoholism, and her older sisters fell victim to the life of the streets. Maria’s household doesn’t have running water or electricity and is located on a dirt field. The houses are makeshift out of aluminum materials and have dirt floors, which is very problematic especially during the rainy season.

The school attempted to have Maria enrolled several years ago, but her parents were unwilling to put forth any effort. As a result, neither Maria nor her sisters have ever attended school. I have seen Maria’s mother many times in Tizate over the years and she has never seemed willing to change anything about the way she lives her life or to hear about Jesus. During this last trip, however, as I was leading a tour through Tizate, our group ran into her.

She seemed pleased to see me and willingly greeted me, which was different from the past. I asked her about Maria and she told me, with tears in her eyes, that Maria was in the hospital in the capital city with pneumonia. I had never before seen this mother so genuinely concerned and affected by the state of her daughter. I could tell that she was more open than ever before, and we asked her if we could pray for her and Maria. She said yes, so our group extended our hands and prayed for her. After we prayed, she thanked us and was quite emotional. I just praised God in that moment, because in the midst of that difficult circumstance, God was working through it to open up the heart of this mother! 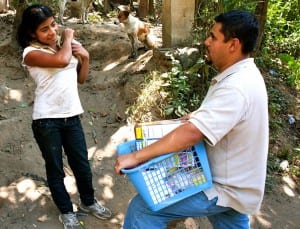 Later on in the week as were planning to deliver grocery hampers, I asked if we could bring one to Maria’s house and go and minister there. I was enthusiastic and feeling very hopeful. We drove down, four of us from the team and our school pastor Jervin. We parked and crossed the river, balancing on rocks, to get to the other side where Maria and her family live. Greeting us was a young girl named Brenda who ran out yelling “Jenny! Jenny!” She went to find Maria and her mother for us.

We stood and chatted, explaining that we had come to check up on Maria and bring some groceries for the family. Jervin was speaking to them about going to church and needing to seek God, as we never know what tomorrow will bring. We prayed with them and were about to leave when I felt led to share some of my own life journey with them. I figured they must look at us Canadians and think, ‘they don’t know suffering… how can they speak to us about Jesus?’ But I said to them, “I know that you may look at my nice clothes, and how I am now, and think that I am just some girl from Canada with a perfect life, but that is not true.” I proceeded to tell them how I grew up in dysfunction, abuse, and how I was addicted to drugs and in and out of prison, and how by surrendering my life to the Lord everything had changed and THERE WAS HOPE.

After I shared, Maria’s mother began to share with us that growing up her mother had died at a very young age and she had to work to help take care of the family. She herself was robbed of a childhood, but now she was passing that brokenness onto the next generation. She told us that one day she had gone up into the mountains planning to kill herself. She had felt so hopeless and broken.

After she shared with us, we reminded her that she was so precious and beautiful in the eyes of God, and that God had never left her nor abandoned her. Jervin explained to her that it was up to her to break the generational cycles so that Maria and her sisters wouldn’t have to carry on that same brokenness. Jervin asked her if it was okay to send his parents to meet with them, so that they could learn God’s word and grow with Jesus. She said yes to this.

There was another younger woman there as well and she also began to share, showing us the scars on her arms from her attempts to take her own life. She showed us this while holding one of her babies in her arms. She shared that she too was into a life of drugs and alcohol and that after her baby’s dad had been murdered, she had lost hope and didn’t want to live. She was in tears and you could just tell that the Holy Spirit was so present, ministering to these women. It was so incredibly beautiful to see them experiencing God in this way.

This was such an incredible time for those of us who were present. It’s amazing to think of the journey we’ve had with this family over the years, and now for this greater opportunity to connect, especially for our school pastor, was amazing. The story’s not over yet!