In October of last year, we celebrated the promotion of our Grade 9 Básicos students. They’d finished the general education requirements for students in Guatemala—a significant achievement—and were ready to move forward, selecting a Carrera stream for their continued education. Jaime was one of the Básicos students who would cross the stage that day, and his parents and siblings had come to celebrate him, but they weren’t the only ones who had come to take part in this moment. Ethan Wall, Jaime’s sponsor for the past seven years, was sitting in the front row, cheering him on with the rest of the audience, and posing for photos with him after the ceremony.

Ethan’s connection with Global Shore goes much further back than the start of this sponsorship in 2010. As the son of Ken & Julie Wall, two of the founders of our ministry, he’s known about Global Shore for as long as he can remember.

When Ken & Julie decided that Ethan would sponsor a kid, they started looking at the pictures of students who needed a sponsor. They were looking at students who were the same age as Ethan, 8 years old. Julie remembers: “Ethan chose him out of all kinds of pictures. We went through and he saw Jaime and said: ‘That’s the one. I want to sponsor him.’”

Jaime remembers receiving a photo of Ethan at that time: “He’s been my sponsor since my first year in the school. When I got his photo, I was really happy to have him as my sponsor.” 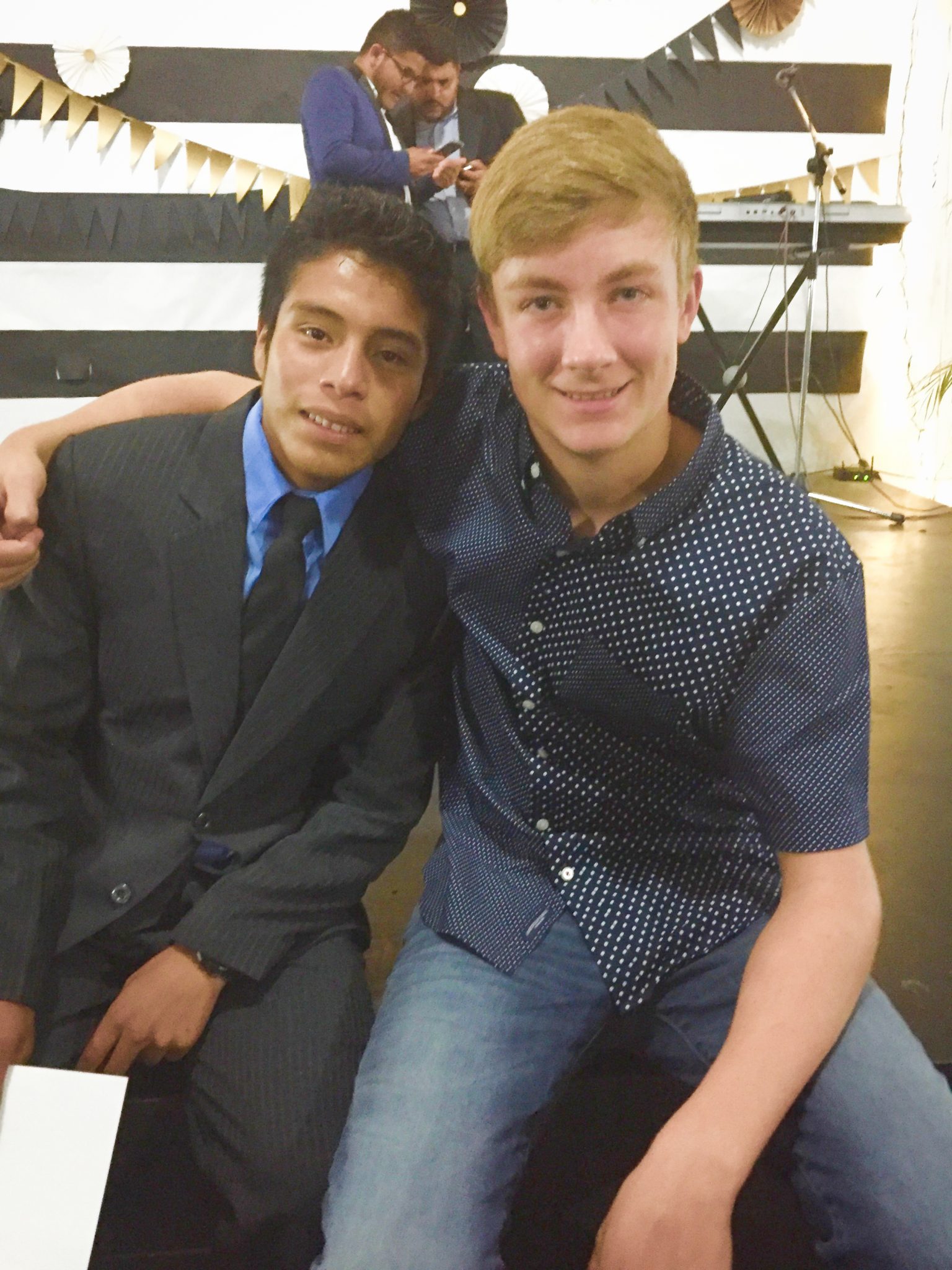 Jaime continued to grow spiritually, thanks to the influence of the school on his life. Samuel, his Básicos homeroom teacher, explained: “I’ve seen him enter into worship, sometimes receiving a lot from the Lord…. I think that he has come to understand what our devotionals, what our school is about. He understands that it’s not about him, but about God.”

“One time we were in devotionals and praying,” shared Jaime, “when I saw the Holy Spirit hovering over Jervin’s [the school pastor’s] head, and I had the profound sense that the Holy Spirit was with us…. This made me believe more in God.”

As they knew Jaime was graduating from Básicos, it only seemed right to the Wall family that Ethan would come and celebrate this milestone in his education. Along with his mother, Ethan flew down a few days before graduation. As part of their trip, they planned to bring a basket of food and domestic supplies to Jaime’s home: a way to connect more with Jaime’s family and strengthen the bond between the school and the family as well.

Julie and Ethan arrived at Jaime’s family home in San Lorenzo, a ten minute drive away from the school, the day before Jaime’s graduation. Accompanying them were Pastor Jervin and Lexi, GSO’s Sponsorship Coordinator.

Jaime and Ethan were both 15—and therefore quiet when both their mothers were there to carry the conversation. Julie and Maria, Jaime’s mother, talk easily through translation about the shared interests of their sons (music), Maria’s job (housecleaning), the Wall family business (asparagus) and the relative heights of Canadians and Guatemalans. Since Ethan has grown in the past few years and Jaime has not, they could try stretching him out for a few more inches, Maria suggested.

After a while, Julie started to ask about Jaime’s plans for the next year. Through translation, Jaime answered that he’s going to attend another school in Pastores on the weekend, so that he can work during the week. Maria broke in to explain: “Ever since last year he’s wanted to go to school on the weekends and help out during the week, but we didn’t let him. He wants to help the family but also to help pay for his own studies.” 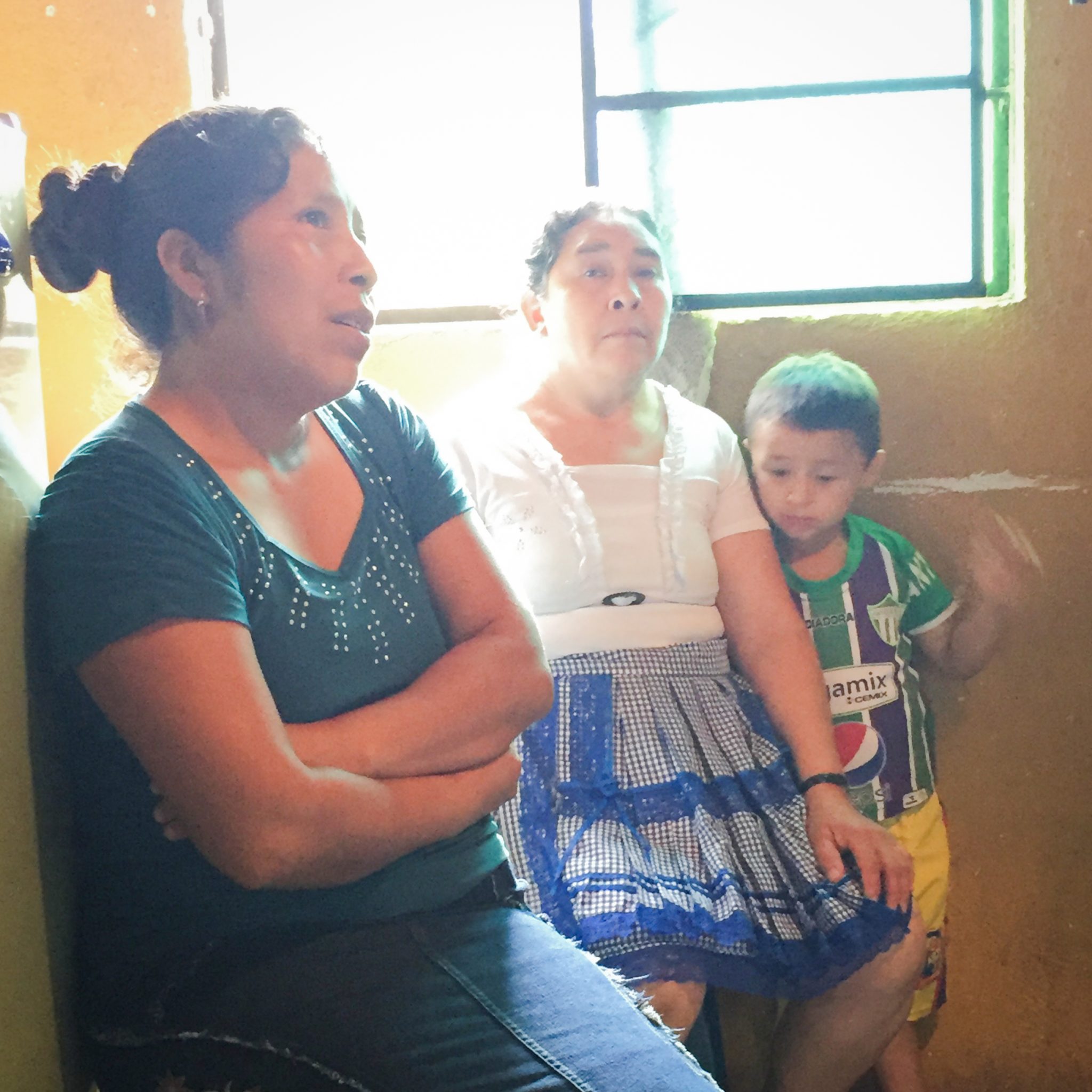 Left: Jaime’s mother, Maria, along with his grandmother and cousin; right: Jaime and Jervin, school pastor; Jervin will often bring hampers with needed supplies to families as a way to connect and communicate the school’s support 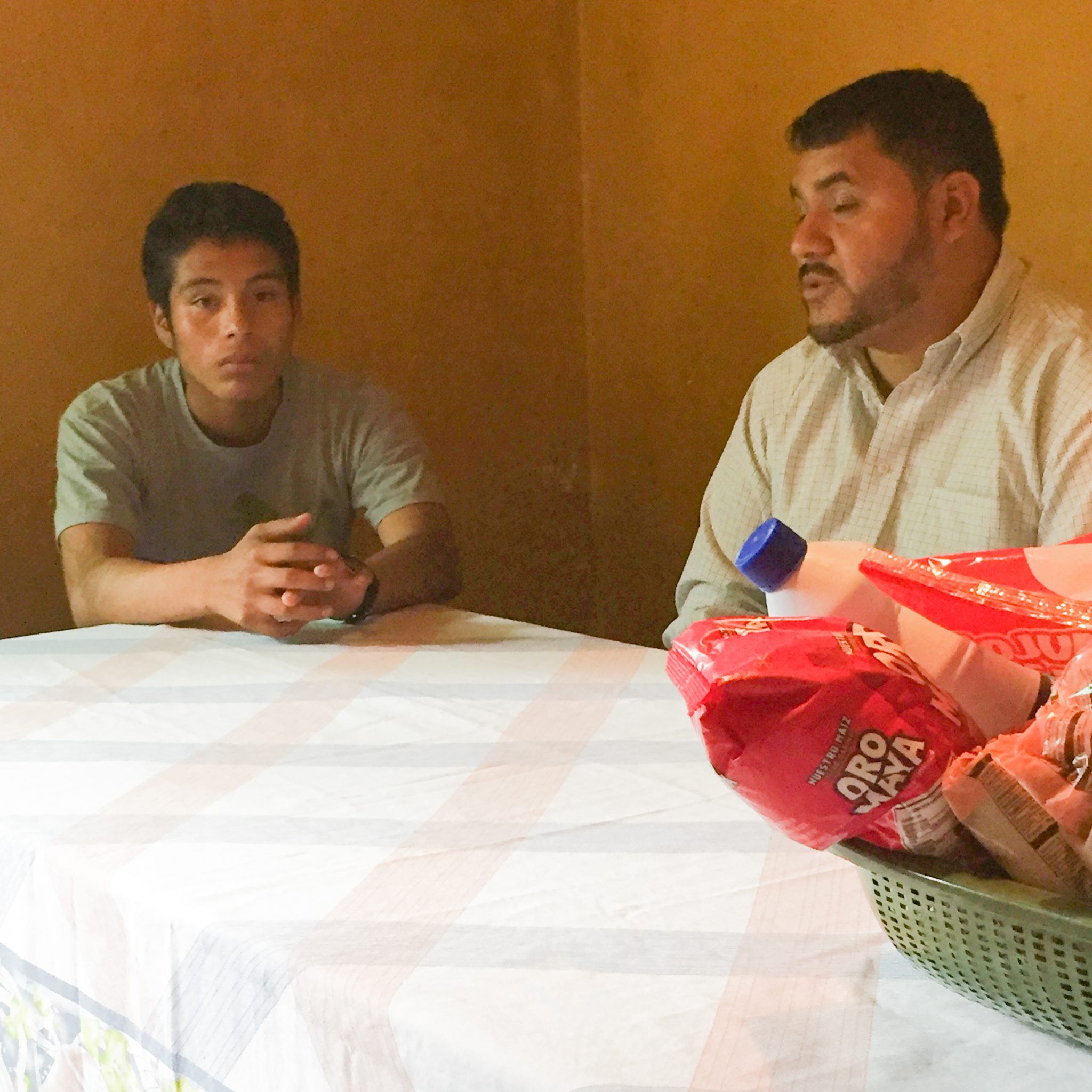 As the visit continued, Julie and Ethan learned that Jaime’s father, Vinicio, was recently injured, and it’s been very difficult for him to continue with his regular work, cleaning equipment on an avocado farm.

Maria continued to explain: “I like the way things are right now. They go to school by bus and come home by bus, and I know where they are. But if Jaime switches schools, what kind of friends will he have? What kind of interactions will he have? I’m not really happy with the idea of him going to a different school.”

Jervin and Maria started talking back and forth, while Jaime sat between them. Jervin told Maria how he’d talked to Jaime about this decision, encouraging him to stay in GSO’s school. The education level was higher at our school, and would make a greater difference in his life than the earnings he’d receive during those years. Further, the accounting program at our school is bilingual, and he’d be better equipped to find work.

After a while, Jervin turned to Jaime and asked him to share about his education experience. “I really like being at the school,” Jaime said. “I’ve learned a lot for my life. I’ve changed a lot from who I was before. Thanks to the teachings they’ve given us about God, I’ve been able to reflect on my life.”

“And the school has helped me as well because they teach music there. I love music. I learned to play the piano and I serve on the worship team [at my church]. I’ve been there for nine years… but now I’m not going to continue there. I know it’s true that the school is really excellent compared to other schools, but…” 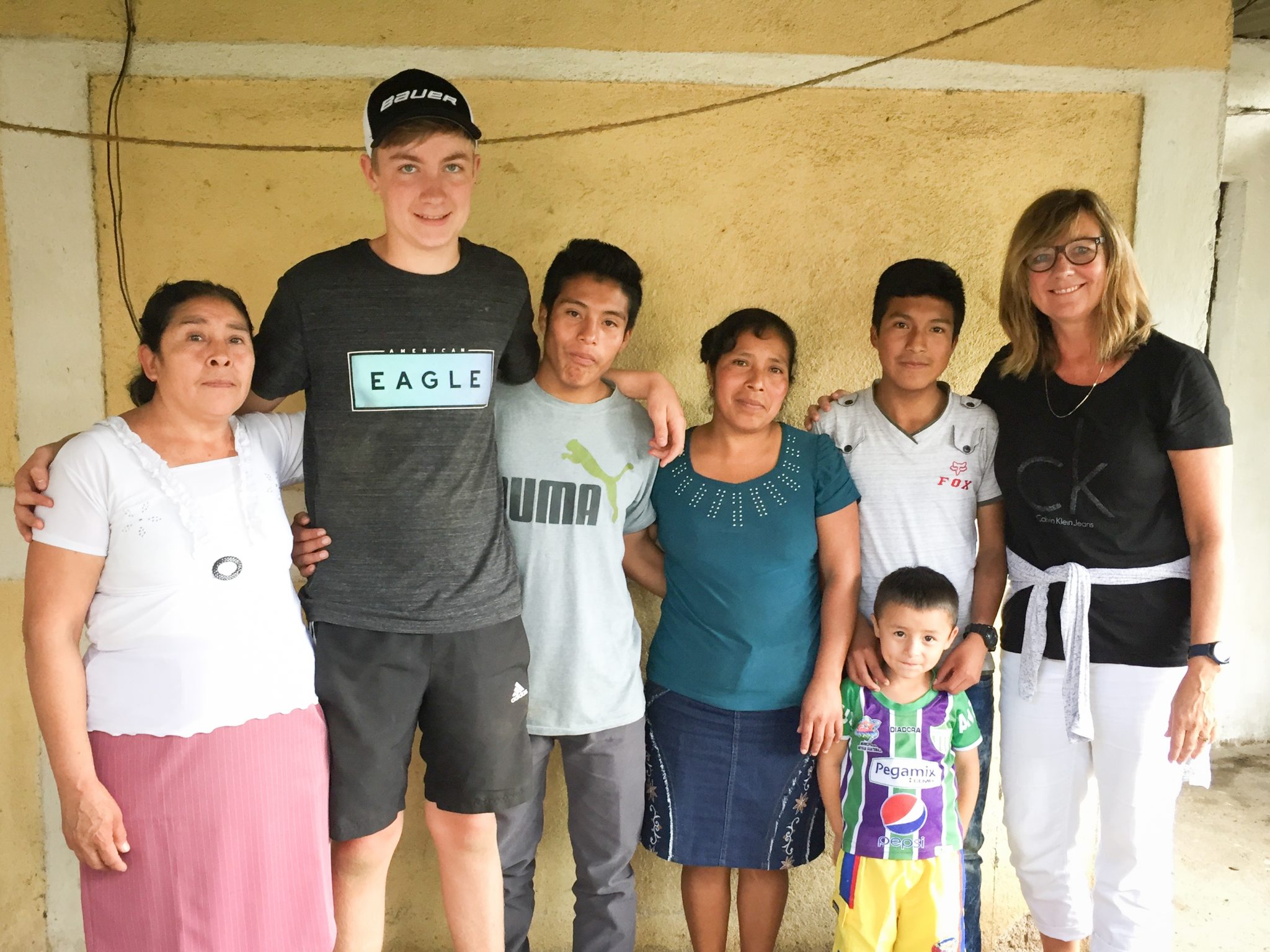 “We’re just so happy to be Jaime’s sponsor,” Julie responded after Jaime finished sharing. “We’ve prayed for him all these years and have grown to love him.”

As the visit wound down, Julie prayed for Jaime’s family, for Vinicio’s injury, for Jaime’s future schooling and job search, and for Maria. As they left, Maria turned to Julie and said: “Thank you for the food that you brought. God bless you, and may He pour many blessings over you.”

The next morning, Jaime came in for his final interviews at the school before his graduation ceremony that evening. When talking with Samuel, his Básicos teacher, Jaime started talking about their visit the day before: “My parents have told me to continue studying here, and I know that this school is more advanced than others, but I had still made the decision to study elsewhere, even though my parents said I should continue here. I was in another place, I might start to change my behaviour, or act badly… So, I have decided that at this point I’m going to continue studying here.”

Samuel asked Jaime what changed his mind. “It was what Jervin said to me: that here, if I keep studying accounting, but don’t find work in accounting, I can get work in a call centre. That’s what changed my mind.”

“I feel that this would help me a lot in my future. After I thought about it, I felt happy about the decision to stay. Although I’m nervous about the future and how carreras will be, I’m really happy, too, because I’m going to learn another language.”

When Julie and Ethan found out that day that Jaime had chosen to remain enrolled at our school, they sought him out, and Julie hugged him. That night, Jaime crossed the stage and received his certificate of completion for Básicos, having his photo taken with his teachers, his family and, of course, with Ethan, his sponsor.

Now, Jaime is in our Grade 10 Accounting stream, studying statistics, law, accounting and English. After seven years of sponsorship, after seven years of prayer, friendship and connection, Ethan and Julie were able to bless Jaime again, by visiting him and opening the door for Jervin to speak into his life. 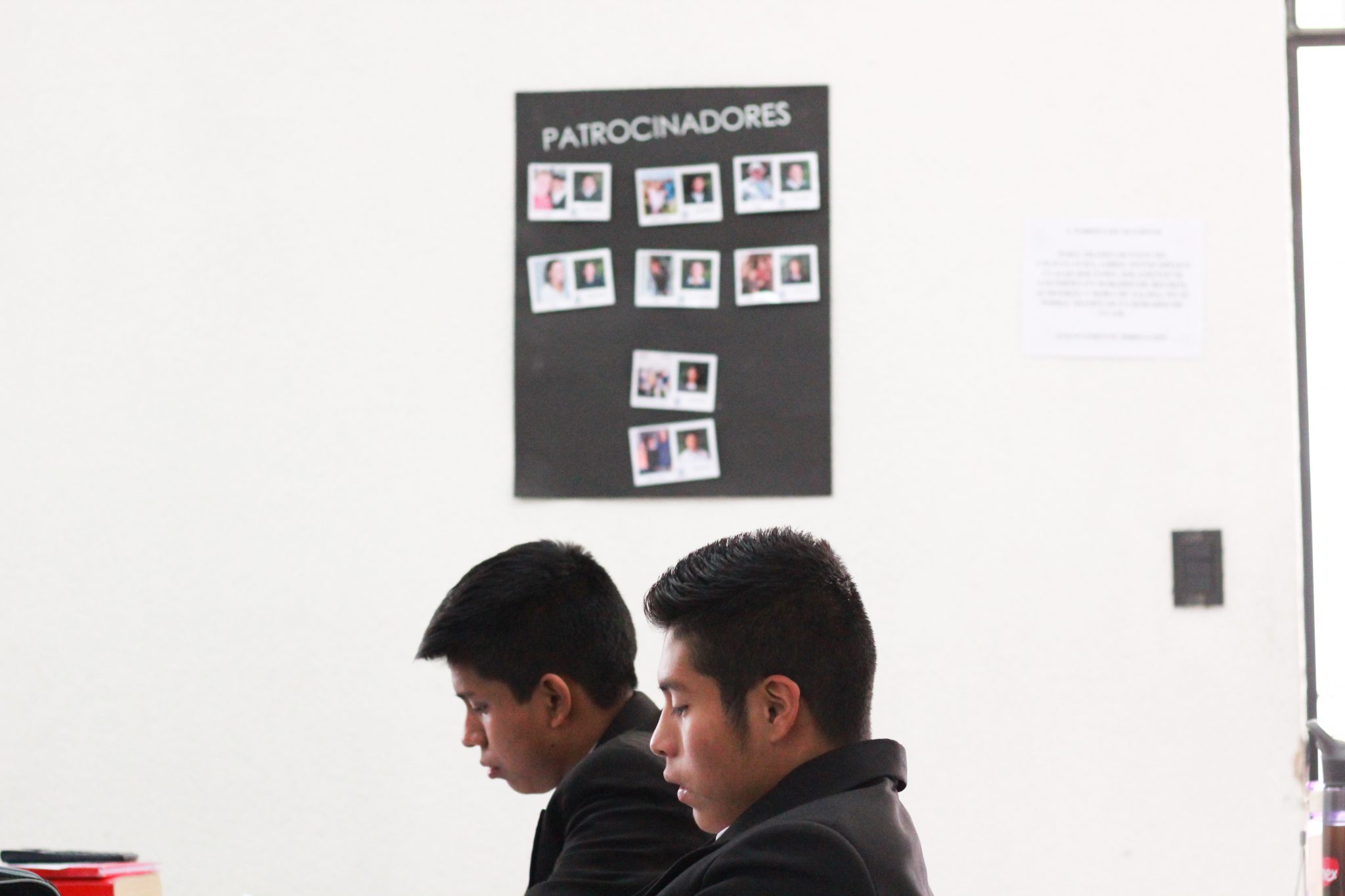 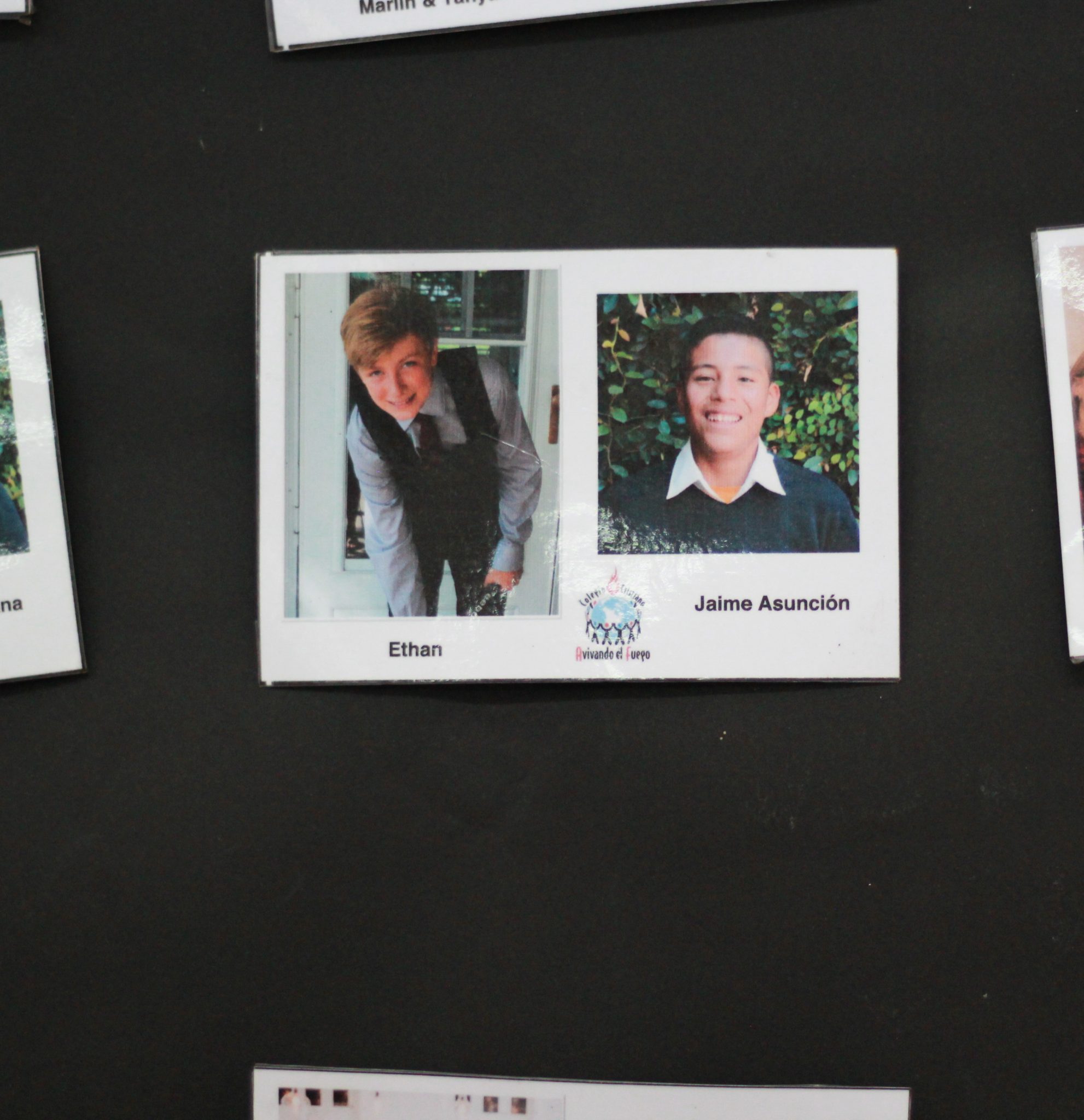 Above: Jaime in English class in Carreras this January—on the wall above Jaime is his class’s sponsorship board; left: Jaime’s sponsorship card showing him and Ethan, his sponsor; right: Jaime practicing English with a group of his classmates 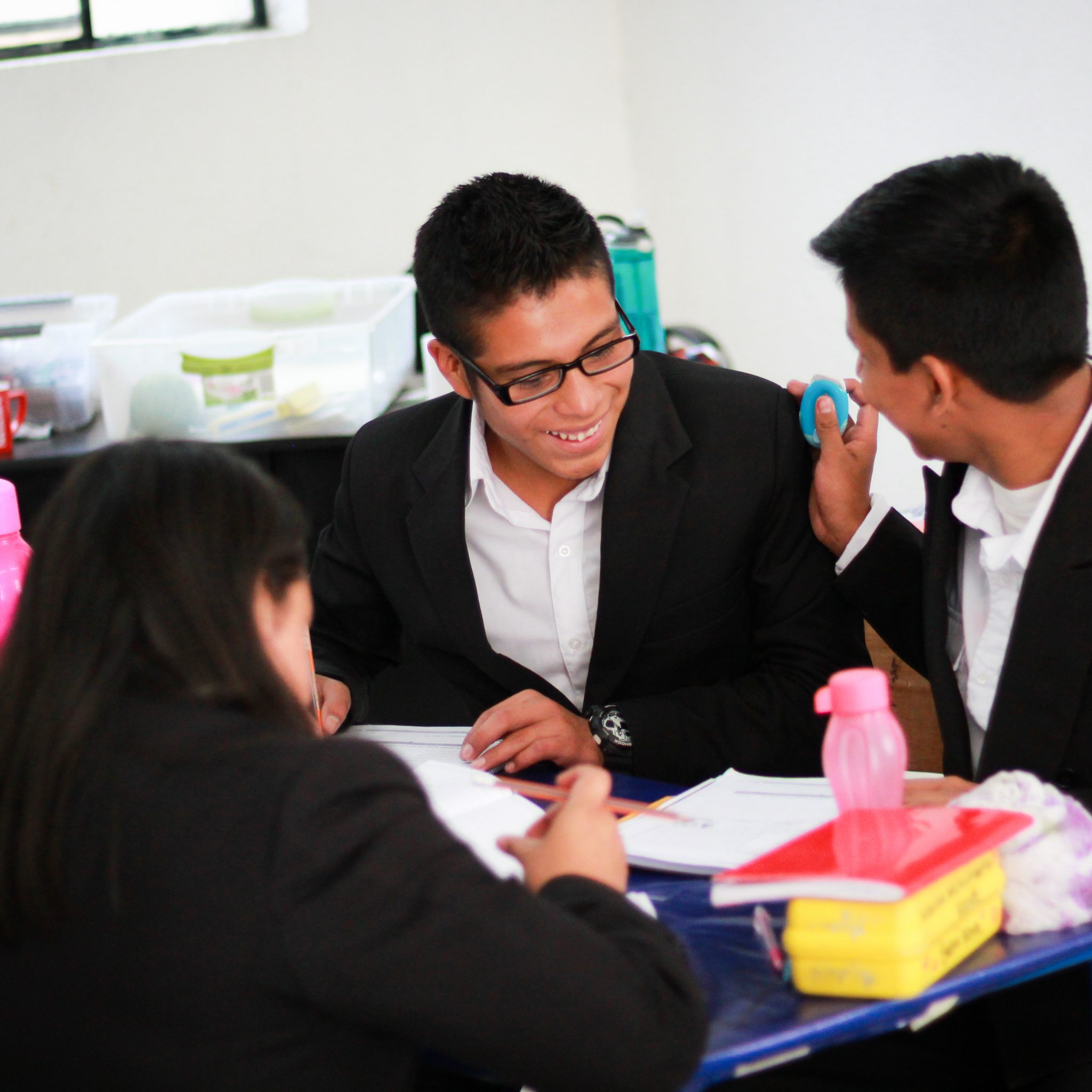 After that last conversation with Jaime, Samuel had the last word about Jaime’s future: “I think he’s going to succeed in what he does, that the seed that’s been planted in him will bear more fruit. I think he’ll be able to finish his studies well, go to university, get a good job, have a good family, and be financially stable.”

“I think—just like every student—he needs to remember that there’s a purpose for what we’re doing: it’s about God, it’s not about us.”