A Day of Worship

Friday (February 15th) was our very first “día de adoración” born in reality in Karina’s heart (our school principal). She has been involved in the fasts at church and thought, “what would happen if we dedicated a whole day to worship with our kids?” We made it semi-optional; kids had an hour that their classes were scheduled to come into the devotional room to participate and besides that, if there were kids who wanted to be there the whole day, they were given the option to “skip classes” (yeah, that’s how fun our school is!) 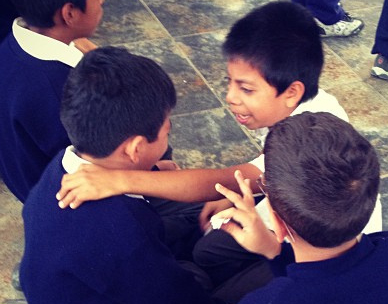 There actually were kids who chose to be there the entire day. Karina, myself, Pastor David, and Jervin were also there the whole day. Other teachers were in and out with their kids and as their schedules allowed them. The day was a combination of led worship, spontaneous worship, as well as times of ministry. It was amazing to see the kids involved in worship, seeing pre-teens and teens who were willing to give of their time to spend time with…Jesus. And Jesus was there. The kids were ministered to and the kids ministered to their fellow classmates. The presence of God was there.  THE WHOLE DAY.

There is a kid named “Angelito” who later testified in front of the school that he, “had discovered he had the gift of changing lives.” He spent about 40 minutes ministering to one of his classmates who had been very, very hurt by his parents. He would pray for him while the other boy openly wept, telling him that he, “had to forgive” and that he could, “let go of the hurt in Jesus’ name.”

One of the girls in Basicos (Grade 7) said that she saw in a vision the Throne, and all around it angels worshipping and worshipping. And the only thing she could touch in her vision was Jesus’ hand.

A girl of about 8 years old got up and testified saying that she had felt Jesus washing her heart clean!

We finished it off with a time of praise and dancing and there was SUCH a sense of joy in that place!

This will not be our last “día de adoración”!

Next
Made with ♥ by Frame | All Rights Reserved