Wow! Fifty…that came a lot quicker than I expected! Who knew that your body could age 30 years and leave your mind back in the ’80s? By the time you reach 50, you’ve blown out enough candles and received enough gifts that a) you are thankful for those single, numeric candles that say “50” and b) the only thing you really want for your birthday is to spend time with the ones you love—nothing of monetary value is really necessary. You’ve worked hard throughout your life and have everything you need—you’re content. This is where I was when my wife came to me and asked me what I wanted for my 50th birthday. I told her exactly that—that I was happy to just to spend a nice evening with my girls…that’s all. Little did I know, she had a much bigger surprise in store.

Busy with work and life, I apparently failed to read Kat’s e-mail with her birthday campaign proposal, and was completely unaware of it—however, Leanne did, and she went right to work on it. She made up a little flyer that explained what she was doing and distributed them to my friends, family, and close customers. With close to four years of involvement in missions to Guatemala, many of my friends and family are familiar with my passion for Global Shore’s ministry as I am continually talking about my Guatemalan kids and the families that I have connected with down there. When my friends and family found out how Leanne was planning to surprise me with a donation to support this organization that is so dear to me, they really got on board.

It was after a Wednesday night bible study (on my actual birthday) that I was presented with the most awesome gift that I could ever receive. Leanne’s initial goal was to raise $500 for 50 years –which she felt was a pretty high goal. When she got her first donation—a cheque for $100—she felt like she might exceed that goal! That night she presented me with a birthday cake that said “$500 for 50 years”—I didn’t get it. She then explained to me what Global Shore was doing as a birthday fundraising campaign and how my close friends and family had come together to support this passion of mine. When I asked her how she did towards her goal, she said that she had received $1500 for the kids in El Tizate!! I was shocked. I can be an emotional guy, and that got to me! To think that all these people got behind something that is so dear to me was incredible! I could not have asked for a better gift for my 50th birthday—one that not only touched me, but will touch the lives of children in Guatemala.

As it turned out, turning 50 wasn’t so bad. I am so grateful for the amount of love and support that was shown to me through the donations made by my friends and family, and I am even more grateful for having the opportunity to use my birthday in a way that it could be shared with others. 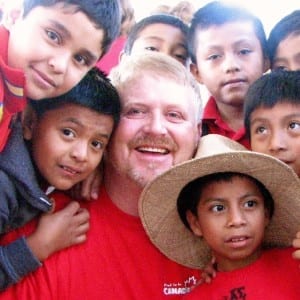 I have never really been a huge fan of fundraising. With so many worthy organizations out there, people are constantly being peppered with requests to donate. As someone who is fundraising, you feel somewhat guilty and get tired of asking people to reach into their pocket’s once again to support your cause. However, when I received the email about Global Shore’s ‘100 at a Hundred’ birthday campaign, I thought to myself, “well that wouldn’t be too hard.”

The email came exactly two weeks before my husband Chris’ 50th birthday, so I thought it would be an excellent opportunity to contribute to Global Shore’s campaign. My only concern was that we were not planning on holding an actual party for Chris’ birthday—so what would be an appropriate way to share this birthday campaign idea with Chris’ friends, especially those who wouldn’t normally give him a gift on his birthday? After contacting Kat and telling her that I wanted do this as a surprise for Chris’ birthday, we were able to come up with the idea of creating a small flyer that explained the goal of the campaign and the place that Global Shore holds in Chris’ heart.

I had a lot of fun planning and distributing flyers, collecting the money, and trying not to blow the surprise. I like how the birthday campaign asked for only a small amount of money, which I felt would be manageable for most people. I was pleasantly surprised at how many of Chris’ friends thought $50 for a 50 year old would be appropriate! My excitement mounted with each donation and the anticipation of Chris’ response. In the end, the support that we received far exceeded my expectations as we were able to raise $1500 for Chris’ 50th birthday! What a great idea Global Shore! We wish you much success with your campaign. I hope everyone who participates has as much fun as we did!